Four projects working to change how we consume, tackling everything from electronic waste to single-use plastics

This piece is part of our Hope 100 series, telling the stories of the people and organisations creating hope for 2020 and beyond

Lucy Hughes’s final university project ended up landing her £30,000 and a Dyson Award. MarinaTex, which Hughes created as part of her product design degree at University of Sussex, is a bioplastic material with the potential to replace single-use plastics in packaging. It is made from waste fish skin and red algae, making it fully compostable and able to degrade in soil within six weeks.

One of the pioneers of the zero-waste restaurant movement, Doug McMaster opened an outpost to his Brighton flagship, Silo, in east London in the autumn. Decked out in upcycled furniture, McMaster’s restaurants are based around the principle of not having a bin. They serve food that fosters respect for: the environment, the way food is produced, and the nourishment our bodies need.

London-based but with a global reach, the Restart Project is tackling the growing problem of e-waste by teaching consumers how to fix gadgets instead of throwing them away. At the organisation’s ‘restart parties’, attendees share skills on how to fix everything from phones to toasters. “We give people a hands-on way of making a difference,” co-founder Janet Gunter told Positive News. 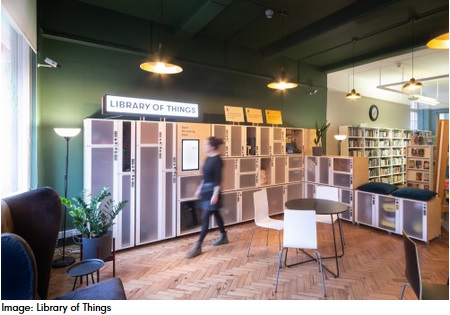 A pleasingly simple solution to society’s rampant consumerism, the Library of Things champions borrowing instead of buying. The original Library of Things in Crystal Palace, south London, was launched in 2017 after a crowdfunding campaign that generated £10,000 from the local community. It allows people to borrow items, from waffle makers to barbecues, for short periods of time. This year it will launch a self-serve locker rental system across London high streets.